My understanding of ‘prototyping’ is ‘thinking in the world’ or ‘integrating with the word by physical means’. Prototyping is the creation of simplified and abstracted models, which can be used to examine individual aspects of a design. The see the overall complexity and effect of a design ‘purely in thought’ is impossible past the very earliest stage.

The way we perceive the world with our eyes can be compared to prototyping: the whole is not considered, rather tiny segments and specific details that make up the whole are tested. Human eyes function in a similar way: we imagine we are seeing a continuous, consistent image of the world, but in fact this image is a construction of the mind. Our eyes are constantly moving, focusing on individual details and scanning them, so to speak.

In our practice, prototyping is the decision matrix of our design process. Even in the inspiration phase we frequently use prototyping; studies of a prototype help in the evaluation and concretisation of concepts, so decisions about which direction to take can be made early on. The same applies to hardware prototyping, here providing ergonomic and production test results that significantly influence further development. Later in the design process, through behavioural studies and application tests, the concept is optimised in an advanced prototype.

So prototyping helps bring form and clarity to ideas. Further, a prototype can be tested and experimented with — which is impossible with written concepts and visualisations. Perhaps the most surprising aspect of prototyping is that it can serve as communication tool. It has become an instrument of communication, particularly with clients, because it is often difficult to convey principle ideas and concepts without a prototype. The strength of prototyping here is the prototype itself — the simplification and abstraction of an idea. Of course, a prototype cannot relate the whole truth; it is merely a functional model. But its strength as a communication medium is in its physical presence and a focus on essentials. A strong impression can be made on clients with a prototype. It fosters transparency and trust for the continued design process — it has at times been so convincing that the client granted complete freedom on an idea — because a prototype is an idea put into the world and made into an engaging experience. 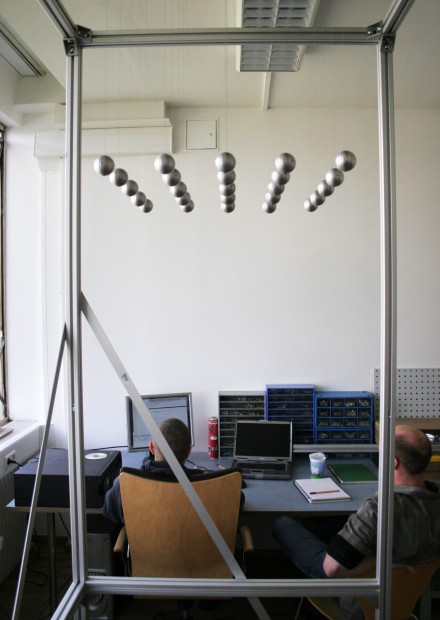 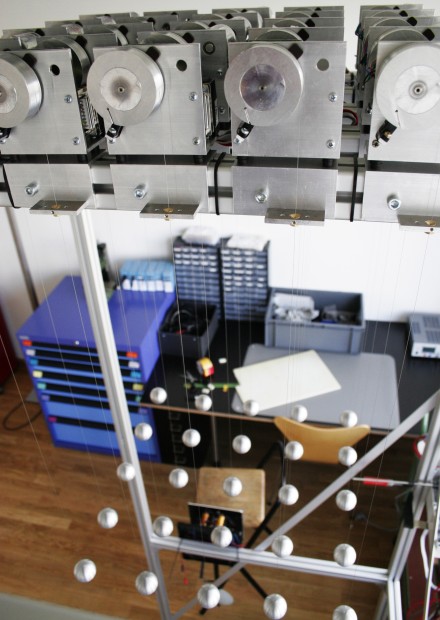 And specifically for BMW Kinetik: During the design phase, the project grew more and more complex, so, early in the process we asked: How can we get the design quickly transposed into a three-dimensional prototype? How many balls will represent the object well, and is the system technically even feasible? We wanted to convince the client that the effort would be worth it, so we made a hardware prototype to be sure that it would function technically in the long term: a cabin with twenty-five metal balls hanging on wires that could be raised and lowered with individually controllable step motors. The prototype enabled us to test and further develop the aesthetic effect of the movement of the three-dimensional matrix. We then combined this prototype with a software prototype so that the client could see both the movement of the balls in physical space and watch the dramaturgy of a complete simulation on screen at the same moment. The answer: “Wow, that is amazing. Let’s do it!”

This text was published in German under the title “Beyond prototyping. Design and Rapid Manufacturing” in Paul, D., Sick, A. eds. “Rauchwolken und Luftschlösser: Temporäre Räume”, Textem Verlag, Hamburg, Germany, 2013.

About me:
I am vice creative director at ART+COM Studios, professor at University of Arts (UdK), Berlin and visiting lecturer at IED programme at Royal College of Art (RCA), London.
http://angesleva.iki.fi